To Market, To Market

I'd like to go to market and buy a new bag, but the economy is putting a crimp in my style.  A quick look in my closet confirms there is no real NEED for a new bag.  Still, sometimes a girl wants what a girl wants and getting out the fabric scraps, loose beads and random buttons feels just as good as a trip to the market.  Now, with the money my friends and I saved on these recycled market bags, we have some money to go to the market for something else. 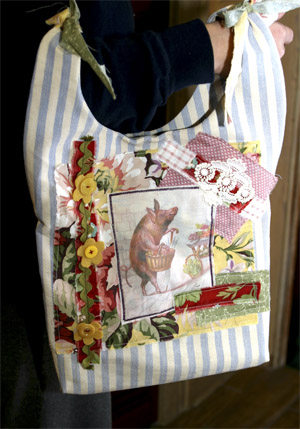 One thing we won't be buying is that expensive fabric paper you use for making cloth images on your computer printer.  I found easy instructions for printing on cloth, by using... of all things.... freezer paper, cotton and Bubble Jet Set.  Hat's off to whoever was willing to take on the risk of pulling ink soaked threads out of their printer.  Your bravery paid off and this trick is a charm. 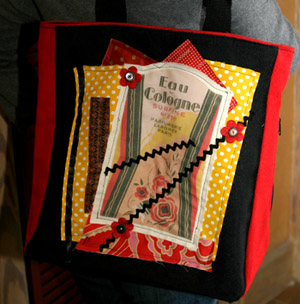 The compulsive pack-rat in me was just jumping for joy, as we stitched those fabric scraps into things of beauty. One of the girls dug up an old canvas bag and covered the logo with her design.  I'd say it was well worth saving our junk for THIS economic rainy day. 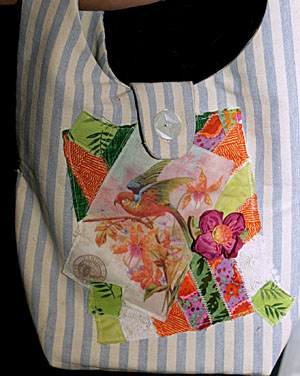 It always amazes me to see how different people approach the same task and come out with such distinctly creative results and yet still be,so much a reflection of the women who made them. 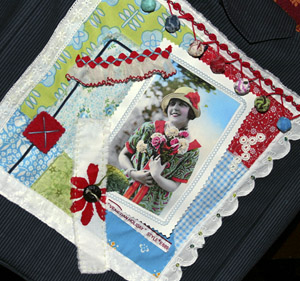 We all used up a bunch of stockpiled refuse, stretched our creative limits AND have these cute as a button bags to take to the market and use as reusable shopping bags.  I'd say this was a win, win project and our monthly craft club loved it.

A Token of Love

This being Valentine's weekend, I thought I would share the story and image of one of my very favorite valentines.  The only thing is... it isn't a traditional valentine and I didn't get it on Valentine's Day.  It was, however, a token of love and came in the shape of a heart from someone who loves me, so I guess it qualifies.

When your mother/grandmother/wife is a mixed media artist, you are often asked to admire and appreciate things which, frankly, just look like a pile of junk to you. Even the finished work sometimes leaves family members shaking their heads and asking lots of polite questions about motivation and meaning.  They may not "get it" just the way I do, but they lovingly display the stuff in their homes anyway and I appreciate that. 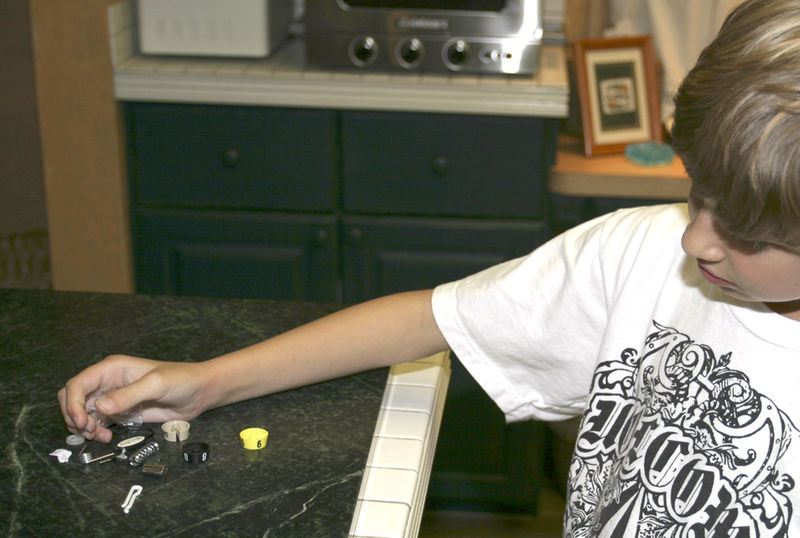 Sometimes, when your mother/grandmother is an artist, you end up genetically and literally "getting it".  My mother was an artist, I've always thought it was in the blood somehow.  My kids are artistic in many ways, though not working artists, but I have a couple of  grand kids whose art genes seem to be really taking off.  One sketches up a storm, one little one just loves to spend hours cutting, pasting coloring and painting. Another one totally GETS the mixed media thing... big-time.

This kid keeps a treasure box under his bed filled with stuff he collects on the side of the road.  He knows if he leaves these weird little things hanging around, someone else might think it's trash and just pitch it.  I love walking with him.  His young eyes are sharper than mine.  He always comes home with a pocket full of oddities to add to his treasure box.

One day last year, he was scavenging in my back yard.  The ground was particularly interesting because workers had just finished demolishing and replacing our roof.  There were all kinds of pieces of debris like old bent nails and shards of weathered lumber to be found.  He was having a blast out there.

I saw him coming in through the back door with an excited look on his face.  He thrust his closed hand forward, his eyes beaming with the joy of my anticipated response.  His fingers rolled open as he said, "I found something for you Grandma".  There in his little hand was a heart shaped piece of asphalt shingle, created by the destruction of many sharp shovels tearing away at a roof put on before this grandson even came into being.  Okay, I know you may not "get" the crazy symbolism that flooded into my heart when I saw that ragged asphalt shape.  Love has lived under this roof, love is standing in this kitchen with his heart in his hand.  It wasn't February 14th, but it was a hallmark of a day anyway and an inspiration to me. 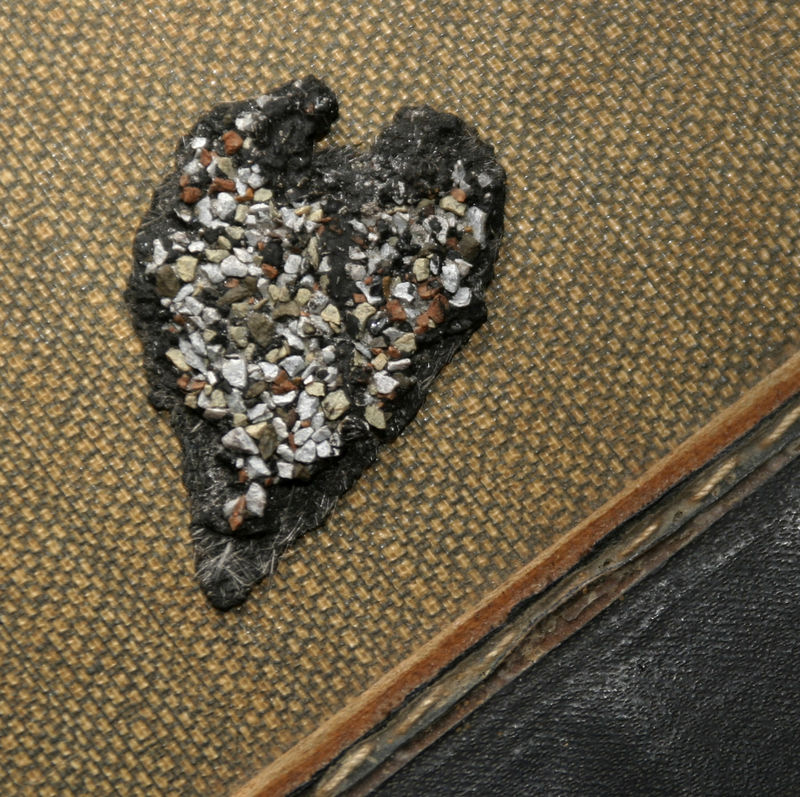 A Little Bird Told Me

Selecting a winner for this giveaway was gut wrenching.  I mean that.  Do you respond to the wonderful head swelling comments and give the thing away to the biggest ego high on the comment list?  Perhaps you should show some mercy in your choice and make the poor woman with curling toes feel better or help the other woman get pregnant by giving her a very cute bracelet to wear?  I tossed and turned thinking about it.  In the end, I just had to let someone else make the choice for me, so...by the random pecking method, my little felted friend, the blue bird of happiness, made the selection for me .  He just doesn't stress like I do.  The winner is ....... 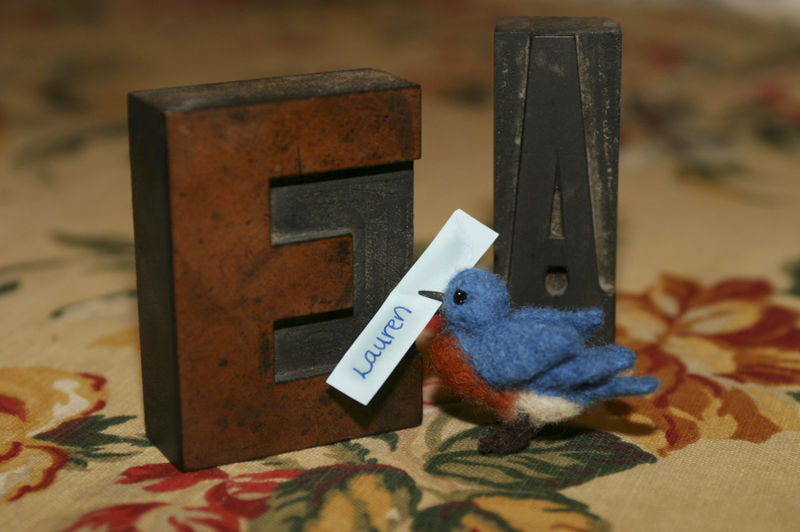 It looks like she loves the Crayon Lines which has now been removed from my Etsy Shop. I'm now awaiting more information from Lauren so it can make it's way to her home and her wrist. (Lauren, if you don't want to get pregnant, be careful). Meanwhile, the little blue bird of happiness has made his way to Etsy as well and will now be available to do your bidding. Those yummy bracelets you all raved about are still available.  I wonder who will take the Cinnamon home for a hot Valentine's Day? 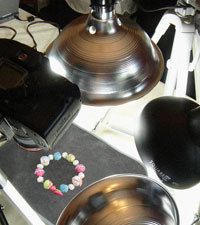 Okay, easy as pie, snap a few shots of your new product line and upload them to Etsy, right? Wrong.  First you need a backdrop which is, of course wrinkled. Then you discover your steam iron has been  invaded by.....ants.  It took about an hour to flush them out of the water resevoir. Word to the wise, if you have a door you can close on your iron's water tank...CLOSE IT.   Next, read the fine tutorial your friend Paula Wessels of Big Picture Scrapbooking sent you on how to get your photo in perfect focus.  Get out the camera equipment and sit down to read the manual.  Read, process, practice.  More lights, another lens, light tent, tripod, and lots of PATIENCE later.... we have photos.

Look at the gorgeous detail in this shot, the fine tuned focus on the fiber and weave, the little sparkle and gleam on the tiny seed beads.  Yum. So many colors, so many moods to choose from.

You know you want one!!! 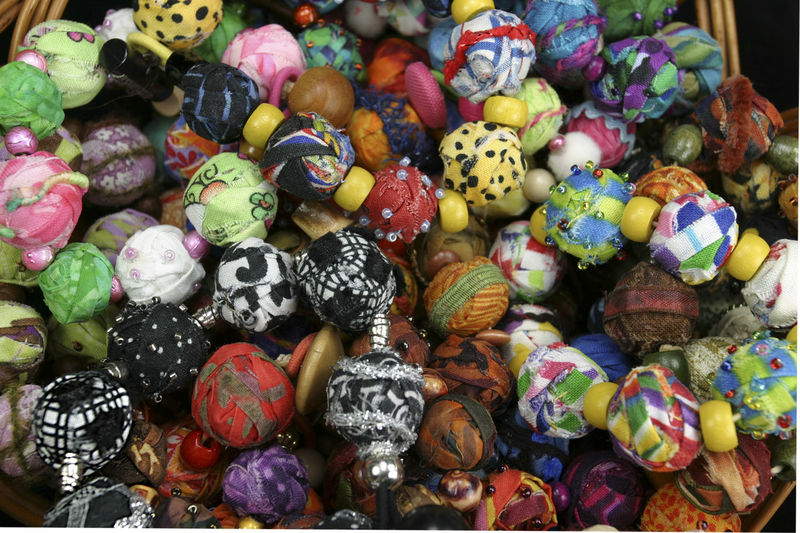 Go ahead.  TAKE ONE.  Take one of these funky fabric bracelets and give it a good home or better yet, take it out for a good time.   My treat. 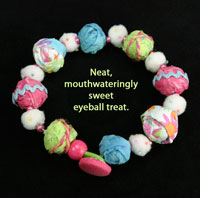 Visit my Etsy shop by clicking the thumbnails on the left or following this link. Browse around until you find your personal favorite, then come back here and comment on it in glowing terms... the sappier the better. Something like, "neat, mouthwateringly sweet, eyeball treat". Don't keep the chance all  to yourself either, pass it around.  After all, These are hard times.  I need the encouragement. At the end of this week, on Sunday, February 8th, 2009... I'll pick the warmest and fuzziest comment of them all and send my new best friend the bracelet of her choice. No Charge. 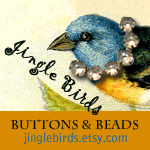 Handmade Directory - All Your Handmade Links

Promote your Page too